I recently de-cluttered my spice cupboard, with the goal of reducing the number of herbs and spices to 12. I managed this, but sort of cheated by not including most of my herb and spice mixes. These are all in larger jars, and most of the time I mix up them up myself. One of my reasons for doing that is that some spices are more expensive than others, and ready-made mixes tend to use more of the cheaper spices.

When I was reducing my spice cupboard to 12, I realised that a) I had two jars too many, and b) I only really use dried herbs in a mix. So I mixed the three herbs in my collection into one jar and added dried parsley which is a staple for herb mixes - problem solved! If you have a particular liking for any herb, just add it to the mix.

This mixture gives flavour without a single herb dominating. I don't use strong-flavoured herbs like rosemary or thyme in this mix because they will overpower the others. If I want to add those flavours I put a sprig of the fresh herb in the food while it's cooking and take it out before serving (if I can find it!).

Equal quantities of all of these. I usually buy a small packet of each and mix them together in a larger jar - and I use loads of it.

If you make a lot of fruitcakes (or if you have a penchant for Spiced Hot Chocolate), it's a good shortcut to make your own Mixed Spice. If you only use this occasionally, I wouldn't bother to pre-mix it. Just add the spices you have on this list to your cake in those proportions.

I do prefer to grate the nutmeg myself to keep it fresh, but it can be a faff unless you have a special grinder, like a pepper grinder. I haven't used one myself, but I recently bought a microplane-type grater - in my case by KitchenIQ for zesting oranges. I tried it on the nutmeg - what a revelation. It's so easy, and this grater catches the ground spice so it doesn't go everywhere.

If you don't bake very often,  I suggest that you buy a jar of Mixed Spice. I don't do that because I'm not very fond of cloves and I think they often dominate mixed spice. Having said that, if I had ground cloves I would add a very small amount to this mix - say 2ml.

So the proportions here are 3:2:1:1 You can scale that up to whatever you want, bearing in mind that you will only need 5-10 ml per cake.

I have quite a few Indian spices, even in my pared-down spice cupboard of 12 Essential Herbs and Spices. I use them all separately but I also use Garam Masala a lot - either in conjunction with other spices or on its own. At my busiest times, I've cooked with just Garam Masala, and a lot of my Indian-style recipes use it, with maybe some cayenne pepper for heat - if needed (e.g. when curry powder is called for).

You can buy Garam Masala, of course, and if you don't cook much spicy food, or don't want to spend any more time in the kitchen, it's a good idea.

Nowadays I use a mixture of pre-ground and spices that I grind or grate myself. Although spices are best freshly ground, I'm afraid life takes over. Although this is a second-best recipe (compared to below) I do prefer it to buying ready-made garam masala.

This version uses whole spices, and I include it for the sake of authenticity. This recipe comes from Madhur Jaffrey's Indian Cookery - a classic that is sadly out of print, although you can sometimes find a second-hand version.

Place the spices in a small dry skillet over a low heat for a few minutes until aromatic but not burning. Grind in a small electric grinder until finely ground. Store in a jar with a tight-fitting lid. As with all herbs and spices, keep away from heat and light.

Gyros is the only one of these Top 5 herb and spice mixes that contains both herbs and spices. I was introduced to Gyros spice mix by an American friend who brought it back from the US in large quantities. That was fine until she moved back herself and my supply dried up. At that point, I researched recipes and started to make my own Gyros. I have done so ever since, even though the miracle of the internet has made buying almost any US brand possible from the UK.

My family isn't too fond of hot (in the spicy sense) food, so this mix is mild to medium.

Bouquet Garni in its truest sense is a little bunch of fresh herbs tied together with string. You put this in your soup or casserole while it's cooking then remove and discard the herbs before serving. Which herbs you use depends on the dish. You could use parsley, thyme, rosemary, cinnamon stick, cloves, bay leaf, sage - but probably not all at once.

I do make my own Bouquet Garni sometimes, now that I have a little herb garden in a group of wooden planters that Keith made for me. I have some neat little muslin teabags that you can put the herbs in and fish out before you dish up.

So when would you use bouquet garni? Mostly in casseroles, especially those with beef. I use it in white sauce and some cheese sauces, where I add it to the milk when it's heating. Better flavour for minimum effort! Similarly, I use it if I make Slow Cooker Stock (which is mostly not an Everyday Cooks thing - certainly not often for me in my busiest days).

Ready-made Bouquet Garni sachets look like teabags and are very useful if you don't want to make your own. I always keep some in my cupboard as a stand-by. Just find a brand that you like. I often use Schwartzkopf Bouquet Garni, but most brands are fine.

There we are then, my Top 5 Herb and Spice Mixes. In fact, these are the only mixes that I use and have done for 20-odd years, so they must have something going for them! if you have any suggestions for your favourite herb or spice mix, let me know. 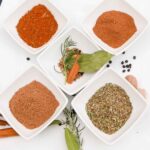 All herb and spice mixes: