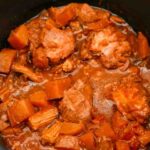 Slow Cooker Apricot Chicken Casserole is a one-step recipe, without any pre-cooking. Chuck the ingredients in and leave to cook all day for a tasty, aromatic chicken supper.

Continuing with one-step slow cooker recipes, here's one for Apricot Chicken Casserole. The chicken joints are coated in spiced flour to give a good flavour and to thicken the sauce. The apricots will also soften and start to break down which adds to the sauce and gives a touch of fruitiness without much sweetness.

I like fruit in casseroles, but I don't like sweet meat dishes. The odd teaspoon of honey is fine, but any more and it really doesn't appeal. There isn't any sweetener in here, although that teaspoon of honey might be quite nice.

Talking to my daughter about slow cooker recipes, she said that she always likes it to be a complete meal, so that she can just dish up and eat. She doesn't mind the odd bit of prep, especially if it can be done the night before, but she doesn't want to cook when she gets home. I can sympathise.

That's exactly how I felt (and still feel). In the evening, before dinner, is not the time that I want to be cooking - even peas can be a challenge some days.

So there are plenty of vegetables in this casserole, including potatoes. I'm using new potatoes so they don't have to be peeled, but they don't need to be small potatoes for this recipe as they're cubed.

There's also a pepper, onion and some baby sweetcorn, which cook surprisingly well in here. They hold their shape and some texture. The only thing to be careful about is making sure they're under the liquid level - or at least under the chicken. They still taste fine but they can look a bit browned off if they are left exposed.

Prepare the night before

The night before you can do most of the preparation:

You'll need to heat the stock on the day when you put everything together. While it's heating you can chop the potatoes, which don't keep well overnight. So you can reduce the preparation on the day by about 10 minutes. And we can all get up 5 minutes earlier, so no excuses!

Slow Cooker Liner - not essential, but keeps the cooker clean. 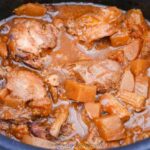 To prepare the night before: